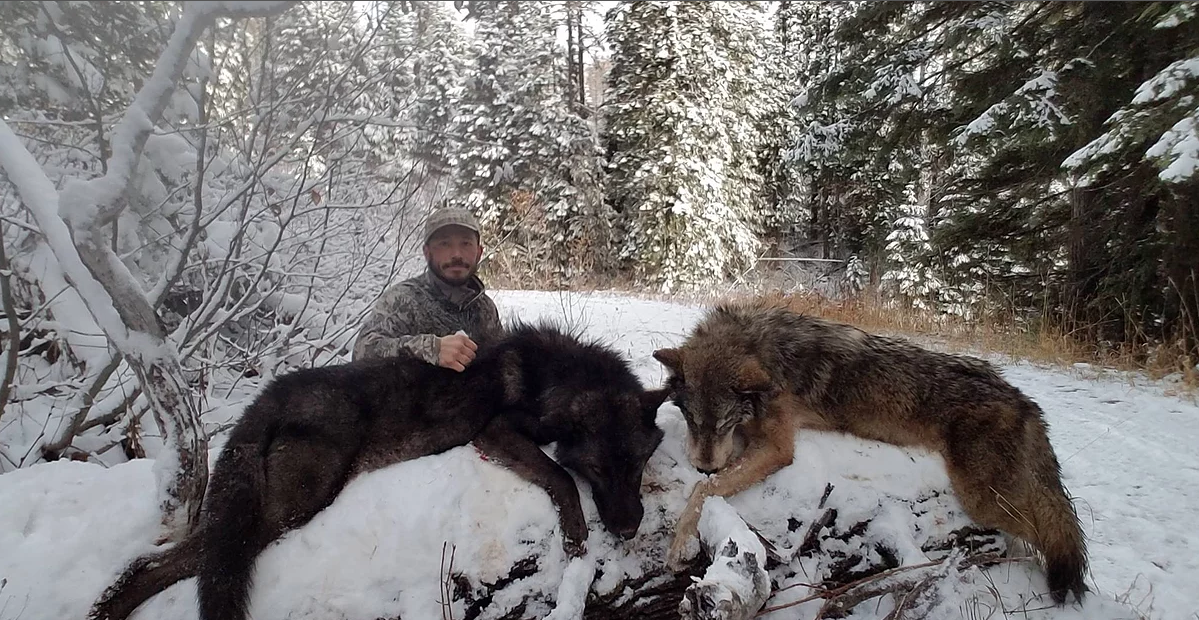 The Foundation For Wildlife Management is a 501c3 non-profit organization whose mission is to promote ungulate population recovery in areas negatively impacted by wolves, assist State Game management agencies in meeting their wolf management objectives, promote youth in the outdoors, and to educate the general public on the negative impact the successful reintroduction of wolves has had on our ungulate populations.

An Introduction to the F4WM Program

Download the ebook by Justin Webb for a more detailed look at the why behind our efforts.

Why do we want to reduce wolf numbers?

Wolves are not being "Wrongfully persecuted and eliminated from Idaho" as preservation groups and media would like the general public to think. Quite the opposite to the contrary... When the US Fish and Wildlife Service delisted wolves in 2009, it was done only after a great deal of study, and defined areas of "Suitable vs Un suitable habitat" for wolves were identified. At that time the Northern Rocky Mountain Distinct Population Segment (NRMDPS) area housed just over 1500 wolves. The NRMDPS spans the entirety of Montana, Idaho, Wyoming, Eastern 1/3 or both Washington and Oregon, as well as a section of Utah. At that time in 2009, it was determined that 1500 total wolves was likely above "long term carrying capacity", and nearly 100% of all "Suitable" habitat for wolves within the NRMDPS was saturated with wolf populations. It was stated that maintaining 1500 wolves or more within the NRMDPS would slowly deplete Ungulate (Elk, Moose, & Deer) populations, and cause Chronic Livestock depredation conflict. The management objective for wolves within the NRMDPS was set at 1100 total wolves spanning the NRMDPS, with 400 in Montana, 500 in Idaho, and 200-300 in Wyoming... Fast forward to today... The 2021 NRMDPS Population count is at more than 3300 wolves... More than 3 times the Management Objective. With 1100 in Montana, 1543 in Idaho, 314 in Wyoming, 206 in Washington, and 175+ in Oregon. And now 46 of Idaho's 78 Big Game Management Units are suffering slowly deteriorating Ungulate (Elk, Moose, & Deer) populations and Chronic Livestock Depredation Loss to wolves... Exactly as the US Fish and Wildlife Service predicted.

F4wm has no interest in eliminating wolves from the landscape, as many accuse us of. Were simply hoping that easing the financial burden of wolf management for Sportsmen, will successfully reduce their population to more manageable numbers that align with the management objectives set forth by the US Fish and Wildlife Service.

In the State of Idaho, over 53,213 Wolf tags were sold last year. Of those, 236 people successfully harvested a Wolf. Only 77 of those individuals harvested 2 or more wolves, and only 36 people harvested 3 or more wolves. In Montana, 20,828 wolf licenses were sold, where 175 people harvested wolves, and only 6 people took 3 or more wolves… With 74,041 wolf tags/license sold, only 411 people were successful… Most by chance as they traversed the countryside in search of other quarry but happened to stumble into wolves in their travels. Only 104 took more than 1 wolf (More likely correlated to targeting of that species), and 42 people took 3 or more wolves… Less than 1% success rate, even with trapping harvest included…

Why are wolves so difficult to manage?

Wolves are amazing, smart, cunning animals who have a propensity to travel great distances in short periods of time, often nocturnally. This makes them extremely difficult to harvest. Hunter success rates are less than 1% (Trapper success rates are often above 30%, but very few people have the tools, skillset, time, and knowledge to “within the confines of the law” convince a Wolf to put its foot on a silver dollar sized trap pan inside of the wolves 250 square mile home range). It is much more difficult than many people would like the general public to believe. Wolves have an average pack size of 6, each having an average litter size of 7 annually. With roughly 30% of the packs having more than one litter due to more than one female being breed, one might expect harvesting a wolf to be easier than it is. Its important to remember that your still only looking for 6 wolves in each 250 sq miles however, and mainly in "Suitable" wolf habitat. Many hear about the negative effects of wolves on our Game populations and expect there to be a wolf behind every tree... That's simply not the case. The problem comes from the amount of negative impact that comes from each wolf or pack of wolves. Based on simple math, would you agree, that Sportsmen are not the threat to overall wolf populations that Media and Preservation Extremists would like you to believe?

What does F4WM do for Sportsmen who do not target wolves?

For the majority of the general public, the F4WM program provides a way for those who work full time jobs, have a family, kids in sports, and other obligations, who cannot run a trapline every 48 hours; Those who recognize the complications with Wolf management and want to do something more than just complain about the problem; Those who are willing to actually “do” something to make a difference; F4WM provides a mechanism for those individuals to be a part of the solution! While most of us are sitting on our couch watching football and/or spending time with our families, there are Sportsmen and women out in the field, married to a trapline, sometimes through blizzards and extreme temperatures, working their tails off in effort to control Wolf numbers, in hopes of keeping Elk and other wildlife on the ground for all of us to enjoy. One side effect of their efforts, often overlooked, is keeping the overabundance of wolves from generating even more enemies than they already have. A scientifically managed Wolf population is far more socially accepted by all who are affected by Wolf numbers. The general public’s $40 annual F4WM membership helps keep those folks who have proven their abilities, in the field!

What does F4WM do for the very few who target wolves successfully?

For the very few sportsmen and women who do have the time, tools, skills, and knowledge to effectively harvest wolves, (those 411 people out of the 74,000 who tried in the 2021 season) their $40 annual F4WM membership provides a way for them to recoup their out-of-pocket expenses to get into the field to specifically target wolves. The process is simple: Their membership must be processed prior to harvesting their Wolf. After joining, when they harvest a wolf, they send us a copy of their Big Game Mortality report or Wolf Harvest registration form, from the respective State Game Management Agency, as well as a copy of their out-of-pocket expense receipts, up to the max allowed in the unit of harvest. We verify those documents, and then mail them a reimbursement check and they keep the Wolf. We have done this over 1,600 times and never missed a payment.

​F4WM also facilitates educational seminars and demonstrations to help educate our membership, and youth, on ethical methods of wolf hunting and trapping. The more knowledge our membership shares with one another the more successful we become at managing our wolf populations. Furthermore, today's youth are the future of wildlife management, and for that reason, F4WM strongly promotes exposure of our youth to hunting, trapping, and other predator management practices. And we include kids games and prizes at each of our events.

F4WM has spent the last ten years working to unite sportsmen groups from Idaho (and more recently in Montana), as well as collaborating with Agriculture industry leadership to create one united voice to bring to the State Game Management Agencies charged with managing our wolf and other Big Game populations. In doing so, through collaborated efforts, we have built working relationships with Idaho Department of Fish and Game, and are working to build similar relationships Montana Fish Wildlife and Parks. Idaho now has the most liberal harvest seasons on the Continent (outside of Wyomings predator zone). Utilizing sportsmen to reduce wolf numbers where wolves are causing the most problems has proven to be the most productive method, at roughly 9% of the cost to do so through State or Federal Agencies.

Our Efficiency is Unmatched

F4WM has removed nearly 1600 wolves with just over $1,325,000 membership and sponsor dollars, with zero tax funding. That's less than $830 per wolf, funded by Sportsmen, Ranchers, concerned citizens, and a few Grants. Without the F4WM program, the Idaho Wolf Control Board would be charged with removing the same wolves. Their expense to investigate livestock depredations and remove problem wolves averaged $9005 per wolf in 2016, $8003 per wolf in early 2017, and more than $9000 per wolf in 2018... 65% of which, has historically been funded by Idaho state tax dollars. 1600 wolves x $9000 per wolf= $14,400,000... 65% Tax funded= $9,360,000 State Tax Dollars potentially saved by implementation of our Wolf Harvest Reimbursement Program.

The reimbursement request process is quite simple- to request a reimbursement, follow the detailed steps below:

Once we receive and verify your reimbursement requests, your check will be mailed within 5-7 business days. Please direct any questions related to harvest reimbursements to Treasurer Teresa Stevens at teresa@f4wm.org

​With the help of your membership or donation, F4WM is able to help hunters and trappers offset high operating costs with a reimbursement for each wolf harvested.

Please help us by joining or renewing your membership today! (Auto renew is available)